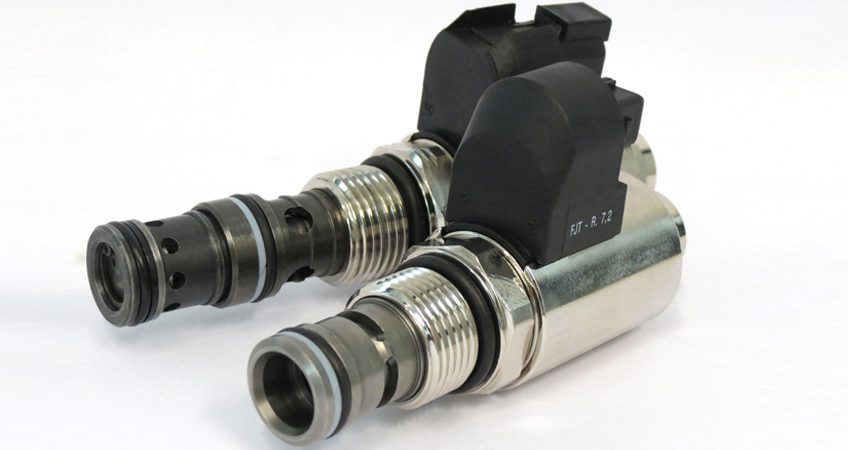 Posted by Tecnord In Articles of Magazines, Product News

Advanced Electrohydraulic cartridge valve technology can bring lower-cost flow sharing/anti-saturation control to standard lift-trucks
Flow-sharing and anti-saturation circuits have long been successfully used on rough-terrain lift-trucks as part of a large stackable directional/proportional valve bank. Now the same type of control can be used on standard lift-trucks by leveraging cartridge valve and hydraulic integrated circuit (HIC) technology. System costs and size can be reduced while providing additional benefits not normally found in large spool valve systems, such as integral load holding and enhanced meter-out control.
Anti-saturation technology, in combination with load sense, works on the flow divider principle. The advantage this provides over conventional means is its ability to control multifunctional operation of hydraulically powered machines when flow demand exceeds pump capacity. This means that all operating circuits will continue to function regardless of any differences in their load and regardless of pump flow, because any flow demand exceeding what the pump can deliver for a given RPM of the prime mover is equally apportioned throughout the total flow demand of each individual function according to the flow dividing principle.
The load holding and low-leak characteristic represents an outstanding advantage of a HIC system. By adopting a combination of electrohydraulic and mechanical cartridge valves instead of spool type valves, load holding and motion control of loads subject to gravity or inertia forces are safely and efficiently secured without compromising the basic anti-saturation feature.

Meter-in and enhanced meter-out control
Control can be further enhanced without the loss of the basic anti-saturation feature by replacing the two pilot-operated unloading valves placed on the A and B lines of each work section with two electrohydraulic, two-way proportional flow control valves to meter oil out in combination with the PWM signal fed to the meter-in proportional flow control valves on the inlet.
The resulting system is a true multifunction device that can be employed either on diesel or electric fork lift trucks. When used in the former class, an outstanding feature is the possibility for the operator to set up a speed interrelationship between two or three functions while the engine is running at low RPM. By simply increasing the engine RPM, all of the selected functions will accelerate while maintaining the same speed ratio. With electric lift-trucks, pump output control can be achieved. Through the proper programming of an onboard machine management system, it is possible to create proper relationships between the angle deflection of the in-cabin control levers, and the input signals to the variable RPM controller (inverter) in order to have the motor/pump unit deliver increasing or decreasing oil flows strictly based on demand. This avoiding the risk of starving the functions subject to higher loads, or of stalling the entire system.
Productivity, efficiency and machine operating comfort have rarely attained at the same time but are completely possible with such a system.